Jack, a U.S. Air force veteran (Strategic Air Command; 13th ADS, Zaragoza, Spain) served as a Nuclear Weapons Specialist during the early cold war years. After his discharge in 1960, Jack moved to San Francisco and began a 30 + year career in the printing equipment and press room supplies business. As part of his sales demos to show off the printing press's capabilities, Jack would run off copies of his pen & ink sketches of fishing boats moored at Fisherman's Wharf. To cinch the deal he would sign the prints as part of the sales package.

When ask by an inquiring prospective art buyer "Have you been doing this all of your life?"............"Well, not yet" he answered with an inviting grin.

Like a lot of us, Jack took the prescribed art courses in school. The only difference, he told us once was "I just never stopped!" He mentioned that his dad, Walter, would give his 5 kids reading assignments and then, ask us to illustrate what we visualized through reading stories by Jack London, Ernest Hemingway & Mark Twain.

In 1989 Jack struck off on his own and with his wife, Sue, opened Harbor Graphics & Design in Gig Harbor, Washington. Ten years later Jack & Sue relocated to Las Cruces in the high desert of southern New Mexico and started Jack Pumphrey Arts.

Jacks specializes in illustrating those things "THAT MOVE YOU" both emotionally and physically! 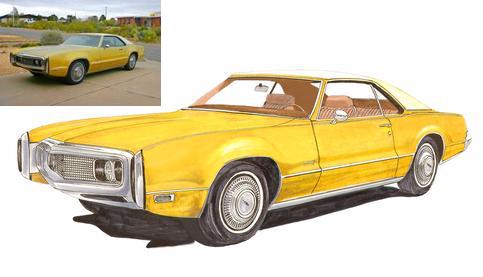 The 1970 Oldsmobile Toronado shown here is Jack's show car. Jack is very proud of his "Original Survivor" and has won several awards in that class. Jack enjoys going to car show events as a participating member of "CRUISERS UNLIMITED" of Las Cruces, NM in southern New Mexico.

The image is of a watercolor painting done from a photo taken of the Old's parked in front of his home. Once the artwork was done, Jack made up a batch of his unique "Cruz'n Cards" to hand out at car events.

If you would like a drawing of your own car, or a drawing of anything else you prize, email Jack at JacksCarArt@gmail.com. Each purchase includes 100 free Cruz'N Cards!